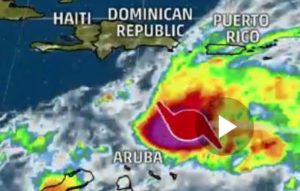 With Hurricane Matthew driving its way through the Caribbean, it is no wonder that there are emergency warnings and preparations taking place throughout the southern U.S.  In Florida, Georgia, and South and North Carolina citizens and governmental entities are bracing for the impact of this storm.   One person has already died and the devastation that has already happened on the Martinique in the Lesser Antilles is monumental.

Right before a storm like this, people in the U.S. head to the grocery store and stock up on provisions to wait out the storm.  This necessarily causes shortages in stores both before and after a major weather event because stores cannot resupply fast enough if there are roads and bridges out.  No wholesale supplier of food stuffs wants to send their drivers into harm’s way and so there will be fewer supply trucks heading into those areas for a few days before the storm and afterwards.

What is rather interesting is that people stock up on perishables not realizing that they might not have any power for days after a storm.  Look at how long the people of Louisiana were out of power after the most recent flooding, or how long southern Florida was out of power after Katrina.  In many cases, the power was (and has been) out for weeks at a time.

People living in areas that are prone to high winds from hurricanes, tropical storms or tornadoes should stop and consider the wisest purchase to protect their homes and families  – a home generator.  We, as a society, depend so much on utility electrical power that we are fairly helpless without it.  As long as power lines are running above ground and can be blown down by high winds, homeowners put the safety of their homes and well-being of their families at risk not having power to keep necessary home systems and appliances running.  When you invest thousands (and along the coast, millions) of dollars in a home and leave it vulnerable to the elements because there is no power, you are tempting fate and the eye of the storm.  A home generator is the one appliance that makes everything else work the way it should when there is no other alternative available.

Permit or Not to Permit
Sump Pump Dilemma
Tags:
Touch to Call!